The Irrefutable Evidence of God

One might think that it is impossible to prove the existence of God. After all, we cannot see him and many can point to natural causes for much of the things we experience today.  Given that so many prominent erudite individuals are non-believers, it is understandable that others may think that evidence must not exist.  But our presuppositions can be blinding.  And yes, of course I am talking about myself just as much as anyone else.  But the Bible does tell us that the evidence of God is so profound, that we are without excuse if we miss it.  That got me to thinking that there must be irrefutable evidence of God’s existence.  And indeed there is.  We tackle three of them.

For since the creation of the world His invisible attributes are clearly seen, being understood by the things that are made, even His eternal power and Godhead, so that they are without excuse, – Romans 1:20

1. Creation Of The Universe Is Irrefutable Evidence of God

Universe Had A Beginning

It was in the 1920’s when scientists begin to zero in on the possibility that our universe had a beginning.  Edwin Hubble put credence to this theory when he discovered that galaxies were moving away from us at very high speeds.  Over time, this theory has seen a continual stream of evidence that points to time having a beginning.  Naturally if the universe had a beginning, one must wonder how it began.  Can you think of anything that just began with no input or cause?  There isn’t anything at all in existence like that.  Anytime someone starts to point to something that may have begun without any input, it requires them to reference some sort of input such as a physical law, a chemical reaction, or some invisible or unknown particle.  But it always goes back to something. 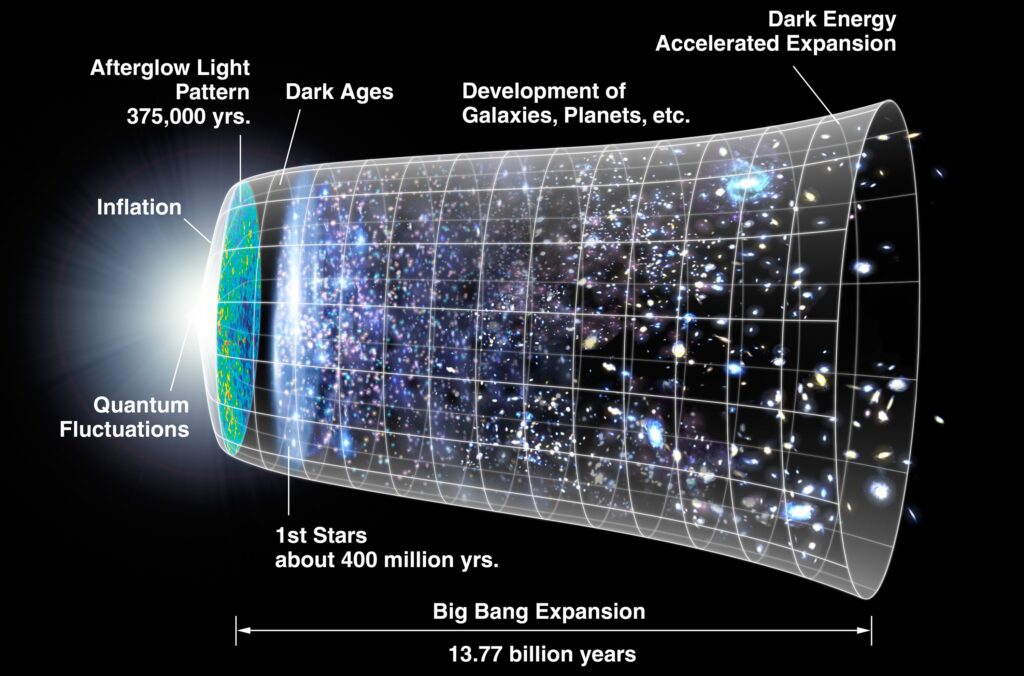 Scientists have attempted to explain this with various theories including the multiverse theory but ultimately, it all points back to something else which is not truly a beginning from nothing.  After all, this would violate our laws of physics as we know it.

But the evidence of a beginning continues to be the predominant theory and there is a multitude of evidence that backs this up.

Is An Infinite Timeline Possible?

What about the alternative?  Would it be possible if time was infinite and the universe did not have a beginning?  What if time went backwards forever? Or, as some have proposed, what if our universe and time was indeed created billions of years ago but that actually was just one of an infinite amount of big bangs (the multiverse theory)?  As some believe, they acknowledge that time had a beginning but prior to it was another existence of time for another universe.  In reality, this is just an infinite timeline but with starts and stops along the way.  So what if, indeed the timeline of history is infinite?  Would that be possible?

Multiverse Is Still An Infinite Timeline

But circling back to a universe that had a beginning that was simply caused by a prior timeline, that is still an infinite amount of time.  In fact, thinking of what occurred before our universe’s time is still history and fits on a timeline.  The fact that it occurred before points to an endless timeline.  And it would still suffer under the same weight as the impossibility of an infinite timeline.

So if an infinite timeline is impossible and all evidence points to time having a beginning, then whatever began time, must be outside of time.  It must not be subjected to time.  This thing or person must be a creator of time.  I want to point out that this is distinct from the universe having an impossibility of infinite time.  Only something supernatural to time must be able to not be subjected to it.  Nothing in a natural world can exist outside of time.  All natural occurrences are subjected to time whether it be in our universe or another one.  This points to irrefutable evidence of God.

God Of The Gaps

The one thing this is not is it is not a ‘god of the gaps‘ theory.  “God of the gaps” is a tendency for believers to point to unknowns and say that because we do not have a natural explanation for something, it must be God.  This can entrap many believers because often times science advances and we gain an additional understanding of a previously unknown explanation.

The reason this cannot be a ‘god of the gaps’ theory is because there is no viable alternative theory.  In fact, science and nature will never be able to explain away the problem with time.  After all, there are only two possibilities – the infinite timeline or a timeline with a beginning.  And since an infinite timeline has already been show to be impossible, then time must have a beginning.  There is no other alternative.  Ever.  And if time had a beginning, even if you could identify what happened a year before the beginning of time for our universe and indeed it pointed to the existence of another universe, the problem just starts over.  You still have to go back to the beginning.  Ultimately your only conclusion is that is leads to the existence of a supernatural being that is outside of time.  i.e. irrefutable evidence of God.

Beyond the creation of time and the universe, there is even more irrefutable evidence of God’s existence.

2. Creation Of Life Is Irrefutable Evidence Of God

Often times unbelievers point to Darwin’s theory of evolution as the central point where all life comes from. In turn, believers get caught up in the debate over the beginning of life and become further wary of science because evolution feels like it points to a natural start to life versus a supernatural start to life. However I disagree with that premise. Don’t get me wrong, macro evolution is not true and there really isn’t any strong evidence to support it including the lack of evidence for transitional species. But instead of battling over the fossil record, it is more appropriate to point to something indisputable.

Whether you believe the first life was some sort of micro organism and all animals descended from it or if you believe that all species had a created start, you find yourself discussing the very first life pretty quickly. The question believers should always ask someone that believes natural causes created life is where did the very first life come from. Similar to creation of the universe, this is a question that science will never be able to answer. It is not that we have not progressed enough in our studies or failed to uncovered some sort of chemical formula that led to the first life. But instead it is a situation that even if someone could recreate a lifeless chemical reaction that ultimately leads to life, they will still not be able to point to the beginning of the chemicals and by proxy, the true beginning of life.

In fact, some scientists claim that we are all made of ancient particles that mixed together somehow and became the basis for life.

That sounds very similar to the passage about God creating Adam by using the dust of the ground and then breathing life into him which further points to evidence of God.

Then the Lord God formed a man[from the dust of the ground and breathed into his nostrils the breath of life, and the man became a living being. – Genesis 2:7

Strategically it is best to concede the ground to evolutionists because you quickly gain it back when they run out of room and find them trapped within natures endless loop.

3. The Law of Causality Is Irrefutable Evidence of God

What is the law of causality?

Causality is the study of how things influence one other, how causes lead to effects.

Everything in life is an effect of a prior cause.  You cannot name anything that exists that was not placed there or developed there by a prior cause.  A rock in your yard is there because of some physical act that caused it to be placed there whether it be because someone carried it there, erosion moved it there, or a volcanic explosion flung it there.  The rock itself was created by a natural process such as melting or cooling of an object, pressure, or a chemical reaction of some sort.  Regardless of how, ultimately the rock came into existence by a prior cause.  It was the effect of some cause.

Even all the matter in the universe traces back to a prior cause.

So how does the law of causality factor into the irrefutable evidence of God?

Finding the First Cause

It factors into the irrefutable evidence of God because there must be a first cause.  A cause that caused all other causes and effects.  If you look at everything in existence and see that it was caused by something else, eventually you walk back to an event that cannot be explained by anything natural.  At some point, you reach a wall within our physical universe and the only explanation is supernatural.  What caused the very first thing to happen?

Even if you could trace things back to the very first thing we are familiar with and you eventually find its cause, you still have to go back even further to find the cause’s cause. Since we have already shown that infinite time cannot exist, you eventually run out of room.  You reach a point that science will never be able to explain.  The only legitimate possibility is a supernatural being (i.e. God).

The Compelling Circumstantial Evidence Of God
Are There Extra-biblical Sources
Are There Missing Verses in the Bible?

Sign up to receive the latest in audio podcasts, videos, articles and resources for Apologetics Made Simple

Access to the Truth Lighthouse library of apologetics study material